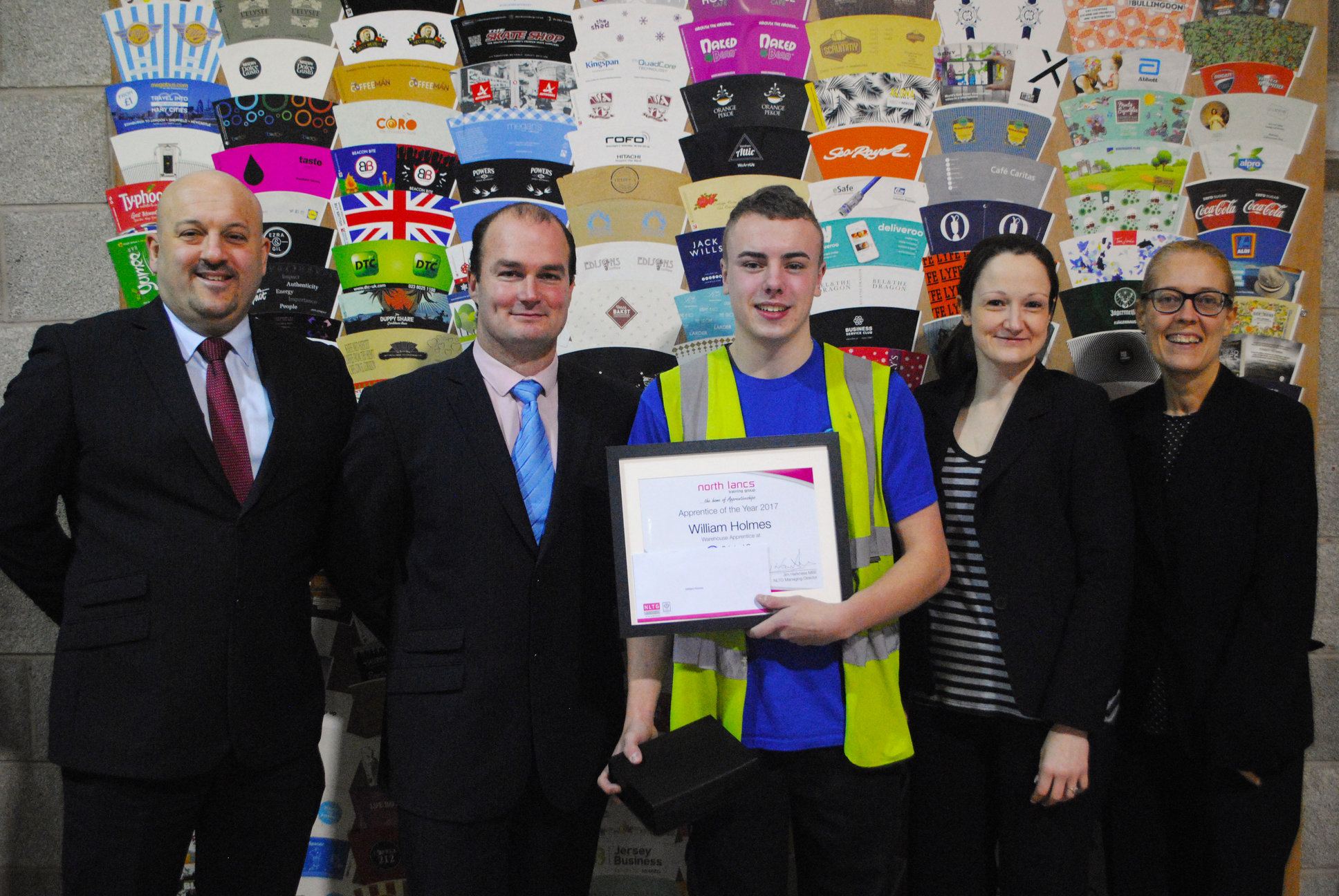 William Holmes started his qualification on the 12th September 2016, this was a Level 2 Certificate in Warehousing and Storage. His scheduled end date was the 13/01/18, however with the quality and quantity of work Will produced, he finished his Level 2 on the 09/10/17. He has now progressed and is now enrolled on his Level 3 Logistics qualification.

Earlier in the year Will’s employer, the Printed Cup Company, were so impressed with his work ethic that they put him forward for the Apprentice of the Year award in the Lancashire Business View Sub36 Awards held in Blackpool. The judges were so impressed with his work and the personal challenges he has overcome that he successfully won the award. If that wasn’t enough he also won the Printed Cup Company’s Employee of the Year Award on Friday 15th December. To put the cherry on the cake for Will and to end a very impressive year, he has just been named NLTG’s Apprentice of the Year 2017, the top of over 2000 other Apprentices from NLTG.

Wills Tutor, Lee Beveridge, said; “Will is always positive in his mannerisms, receptive in relation to new theories and enthusiastic to learn more. During the time spent with William as his tutor, I’ve seen his confidence, understanding and self-awareness progress.”

William said, “The Company and my tutors have brought me out of the shell I have been in for the majority of my life. I have gained more courage from the things I have passed like my fork lift licence for example and my maths and English level 2. I have become more confident at speaking to new people and found it a lot easier making new friends.”

Feedback from his employer is always positive, Shahida from the Printed Cup Company explained that Will has become an invaluable asset to the department in a remarkably short period of time. He is always cheerful and good humoured, always quick and willing to learn, approaching every new challenge which a relish and maturity beyond his years.

Tony, the warehouse manager commented “From a managerial point of view, I know that I can delegate responsibility to Will safe in the knowledge that the task will be carried out to perfection and without the need for my direct supervision. This in turn allows me to concentrate on future planning for the benefit of the department and the company as a whole.”

Pictured below is William on receiving his NLTG Apprentice of the Year certificate, trophy and cheque from NLTG Operations Directors Gareth Lindsay and Collette Humphreys alongside his NLTG tutors.